Master Sha’s teachings are breakthrough to empower you through a holistic method in every part of your life.

Find out how it works.

Chinese calligraphy is an ancient art that has been widely practiced and honored for centuries as a beautiful medium of artistic expression. It has been used as well as to receive qi (energy) and enrich life through its positive messages. Writing Chinese calligraphy is known as one of the most relaxing yet highly disciplined exercises for one’s physical, mental, emotional and spiritual well-being.

In 2017 researchers showed that calligraphy significantly reduced heart rate, respiratory rate, systolic blood pressure, as well as self-reported state-trait anxiety levels, depression levels and stress levels in breast cancer patients who received an eight-90 minute Chinese calligraphy intervention. Two hypotheses were supported by the results of the research: 1) There was a physiological slowing effect in blood pressure, heart rate and respiratory rate among breast cancer patients after the intervention; 2) Breast cancer patients had reduced scores on self-reported measures on anxiety and comorbid depression levels after the intervention.

Tao Calligraphy is a unique form of Chinese calligraphy developed in 2013 by Zhi Gang Sha, MD (China) and professor at the State Ethnic Academy of Painting in Beijing. It is a unique style of calligraphy that combines the flowing artistic beauty of Yi Bi Zi (a calligraphy style wherein entire characters and even phrases are written with one continuous stroke)

The Sha Research Foundation has studied the effect of a unique style of meditation where mindfulness (heightened awareness) is achieved by combining movement and focus on Tao Calligraphy with mantra chanting.The practitioners focused on and traced the path of a Tao Calligraphy with five fingertips together and this enabled them to achieve deep meditative states, while maintaining fully alert awareness.This unique practice can be best understood as a combination of meditation and qi gong (energy practice). Therefore, the healing effects on the mind and body can be quite profound. 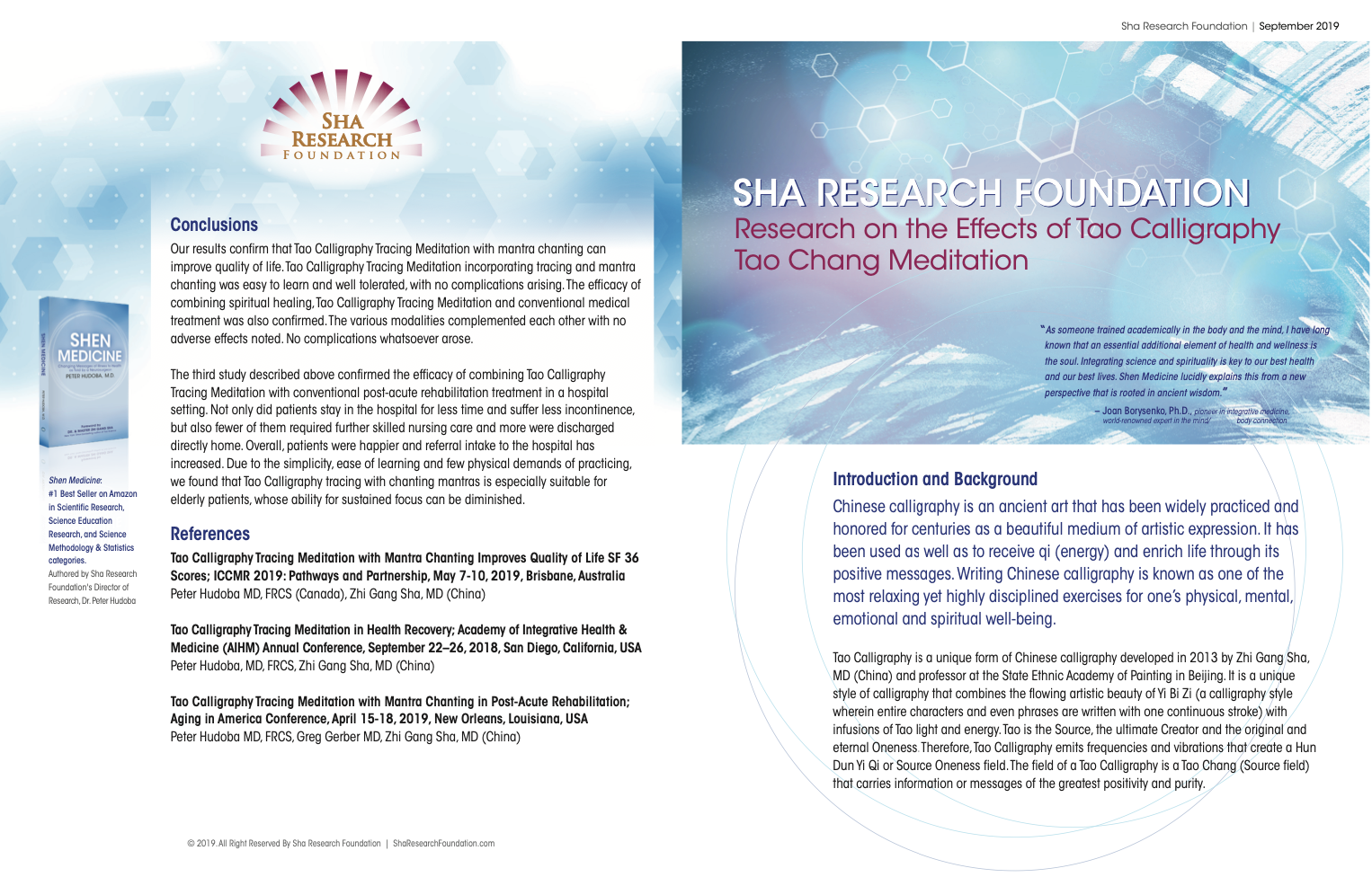 The Power of Forgiveness

Studies have found that the act of forgiveness can reap huge rewards for your health, lowering the risk of heart attack; improving cholesterol levels and sleep; and reducing pain, blood pressure, and levels of anxiety, depression and stress. And research points to an increase in the forgiveness-health connection as you age.

“There is an enormous physical burden to being hurt and disappointed,” says Karen Swartz, M.D., director of the Mood Disorders Adult Consultation Clinic at The Johns Hopkins Hospital. Chronic anger puts you into a fight-or-flight mode, which results in numerous changes in heart rate, blood pressure and immune response. Those changes, then, increase the risk of depression, heart disease and diabetes, among other conditions. Forgiveness, however, calms stress levels, leading to improved health.

Forgiveness – Your Health Depends On It

Stay up to date about all the events and happenings related to the Tao teachings. There are regular special offers and complimentary gifts that we would love to share with you.

To view further content, you must have fully read and understood the previous material.